Church of Our Lady and St. Joseph, Kingsland, London

We have recently completed an update of works for this project, details of which can be found here. 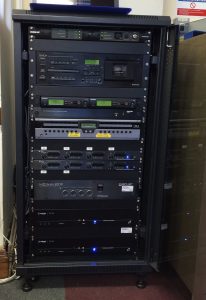 Read the original case study below

In May 2012 we were approached by Rev. Fr. Michael Daley of the church of Our Lady and St. Joseph in Kingsland, London to review the installed sound system at the church. Fr. Michael was not satisfied with performance from the system and believed that a fresh approach was necessary as the system had been attended by others who did not seem to be able to comprehend his lack of satisfaction or find ways to improve the system.

The church of Our Lady, situated on the Balls Pond Road, Islington is a large rectangular open space having a convex shaped ceiling entirely supported off the side walls with no additional columns. The structure is brick and the interior walls are smooth plastered and painted. The floor is covered with a helpfully thick carpet although less helpful is the seating of polished wood bench type pews.

The system installed at the church of Our Lady, Kingsland had its foundations in a design of around 25 to 30 years old that would have been fundamentally better than functional in original form; however, as elements of the system had failed they had been replaced by many incorrect products that no longer complimented or were compatible with the design.
In spite of considerable sums having been spent on supposed maintenance this had resulted in a system that no longer offered adequate gain before feedback and suffered from the inevitable problem of those people seated furthest from the talker being unable to follow the spoken word.

When presented with a system performing to such a poor standard it is necessary to begin by considering what is needed by the user and also what is dictated by the prevailing acoustic conditions. We, therefore employ certain scientific mathematical formulae which enable us to calculate the potential gain before feedback of any sound system the results of which will guide us to an accurate prediction of potential performance. The formula requires that measurements of the room in question are taken along with the exact location of loudspeakers, microphones, listeners and ‘talkers’. Consideration must also be given to background noise levels.

The investigation confirmed that even in original form the system would struggle to achieve acceptable levels of gain before feedback due to the close proximity of loudspeakers and microphones; but that due to the earlier replacement of some elements with ‘budget’ or incorrect products gain before feedback would be reduced to close to zero explaining the current situation.

Being conscious that not inconsiderable sums had already been spent to no benefit, we produced a proposal comprising of three prioritised phases so that it would be possible to progress as budgets permitted.

Phase One – Replace the three main microphones with more suitable units compatible with the application and to investigate the condition of the equipment rack internal wiring about which we were highly suspicious. To assist with the decision making process we installed for one week some demonstration equipment to replicate our Phase Two proposal so that we could then move forward with confidence.

Phase Two – Investigation of the rack proved that the cabling condition was very poor and that the equipment previously replaced was even less suitable than originally thought. It was therefore decided to replace with a new digitally programmable microphone mixer and signal router that could perform in a similar but superior fashion to our demonstration equipment, along with a new multi-channel amplifier. This would enable accurately processed and equalised signals to be distributed to individual groups of loudspeakers thereby further achieving the desired gain before feedback, intelligibility and naturalness of speech.

Phase Three would have been to move two loudspeakers but this proved to be unnecessary as Phase Two had been entirely successful; however, it was decided that as the existing radio microphones were not performing satisfactorily these should be replaced with up to date units capable of operating on the current channels 38 as authorised by OFCOM. These works also necessitated different antennae to ensure that, at last, radio microphone reception was available throughout the entire churchwhich it previously was not.

The system has now been operating satisfactorily for five months and achieving both the required levels of gain before feedback, speech intelligibility and reliability.

We are delighted that Fr. Michael felt able to offer the following testimonial and to permit us to reproduce it:

“Earlier this year, I was having some significant problems with the sound system at my Parish Church. I was frustrated and dissatisfied with the work carried out by another company and asked Peter Kenny from Sound Systems UK to call and assess the situation. From the very beginning of his work with me, he was incredibly thorough. His painstaking approach, expertise and professionalism revealed many problems, and also possible solutions. He made helpful and practical suggestions and carried out his work with excellence. To this day, I am very satisfied with what he was able to achieve and would have no hesitation in recommending him and his company to anyone, or indeed using his services again.”