Sound Systems UK has a distinguished pedigree of working on a variety of high-profile projects and during November 2015 we collaborated with iconic brand LEGO to design and install the sound, lighting and electrical control elements of the new ‘Santa Express’ train, which boasts an astonishing half-a-million LEGO bricks. It is the fifth year that LEGO has constructed a festive installation over the Christmas period, showcased at London’s busy Covent Garden.

Understandably, robust quality and enduring performance were a central requirement among the factors central to the design and guided us to specify products that have previously ensured successful results such as the Tamlite versatile LED Flexi Strip, suitably adapted for the application in a similar way to one of Sound System’s other recent projects, the giant Christmas LEGO Sleigh that, following an initial stay in London, recently took up ‘residence’ in Liverpool ahead of the 2015 Christmas period.

For the lighting, an ability to operate reliably no matter what the elements might throw at it was a prerequisite – but so too was the ability to complement the unusual shape and configuration of the installation.

Sound has been achieved by secreting weather resistant Tannoy loudspeakers and associated custom amplification inside the train which are, in turn, supplied with sound effects from a TOA solid state recorder; products with which we have had considerable success in the past. Of this year’s LEGO construction, Luke Kenny states that the Santa Express “Isn’t exactly an everyday kind of project. The lighting had to be able to fit easily around the curves, rough edges and 90 degree angles of the train. Our previous experience with Tamlite LED Flexi Strip – including on the LEGO sleigh – meant that it didn’t take much time for us to specify it for this latest project.” 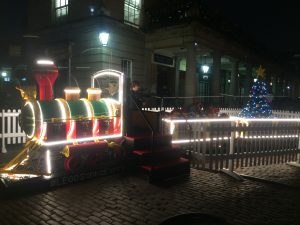 if conventional lighting had been deployed. But the need to guarantee a 4000K colour temperature for bright and crisp illumination meant that the selection of LED product had to be an exacting one.

We are fortunate in the fact that we have a very good relationship with manufacturer Tamlite, as, such was the limited timescale of the project that we were reluctant to employ the standard 5m lengths in which LED Flexi Strip is typically supplied.

“It wasn’t really going to be practical for me to spend time cutting the strip on site to ensure that it fitted the locomotive,” Luke admits. “Fortunately, Tamlite was more than happy to manufacture one continuous 80m strip, which we then wrapped around the edges of the engine and two carriages which saved us valuable time particularly taking into account that commissioning had to be carried out during night time!”.