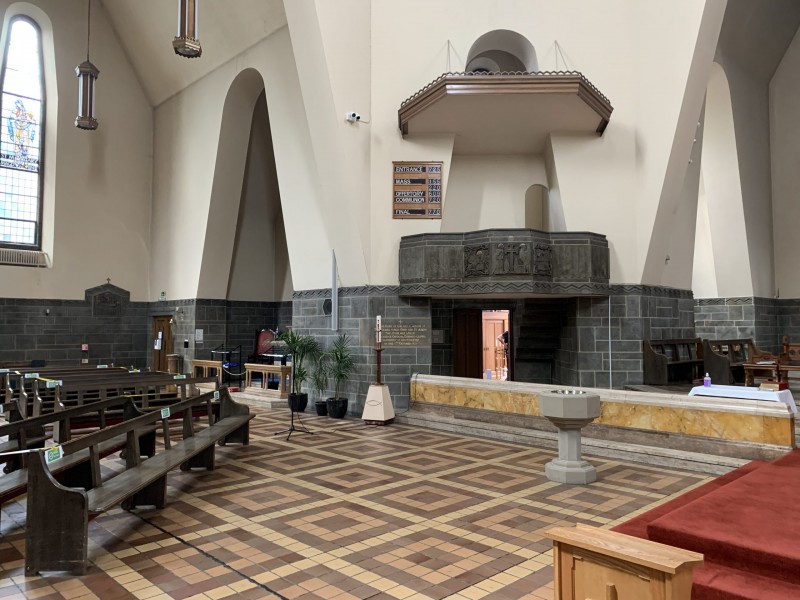 Parishioners and clergy alike at the church of St. Mary & St. Joseph, Poplar had been aware for many years of a lack of good speech intelligibility and gain before feedback and that there was definitely some potential for improvement and so Peter Kenny of Torpedo Factory Group was approached to investigate for a solution.

The church is a grade two listed building designed by the celebrated architect Adrian Gilbert Scott as part of a project associated with the Festival of Britain, it was constructed between 1951 and 1954 and is a powerfully imposing structure.

Historians report that the building was regarded as old fashioned when it was built but that it is now appreciated architecturally for the workmanship, materials and design; it is now widely considered to be Adrian Gilbert Scott’s finest church.

Our main concern is, of course, with sound reinforcement and the acoustics of the interior which is formed of a vast open space that is cruciform in plan with the central congregation seating being formed of a square and the North and South transepts being arms to each side accommodating further seating with Chancel and Narthex to the west and east respectively.

On attending the church we met Fr. Keith Stoakes the parish priest; the existing sound system was demonstrated using radio and wired microphones and it was agreed that the sound was largely unintelligible, achieving an intelligibility measurement using the NTI Acoustilyzer of worse than 0.4 and suffering from a particularly ‘boomy’ characteristic; it was also judged to be on the threshold of feedback even with a low level of reinforcement.

Referring to our early assessment and measurements; the speech transmission index is a recognised standard of test and measurement which sets out to ensure that an electro-acoustic system achieves adequate levels of intelligibility and enables us to avoid dependence upon subjective opinion.

Speech intelligibility (Sti) measurement techniques use synthesized test signals that do not sound like speech but which have common characteristics to real speech signals, the resulting sounds are then received to a meter through a calibrated microphone.

Sti ratings range from 0 – 1 with 0.5 being fair and 1 being a level of almost unachievable excellence; in other venues the worst I have measured being 0.35 and the best being 0.83

The old sound system at the church comprised of a number of small column type loudspeakers distributed around the walls and pointed in toward the congregation at the centre of the open space.

Experience of similar buildings where the volume of space is disproportionately high when compared to the amount of acoustic absorption and in the case of St. Mary & St. Joseph none at all except the clothing of the congregation, guides us that such an arrangement of loudspeakers is incapable of delivering intelligible speech; we, therefore, recommended that a demonstration test of a steerable array type loudspeaker such has we have used to achieve successful solutions in churches such as St. Mary le Bow, Cheapside, St. Bartholomew, St. Albans and also St. John’s, parish church, Pinner should be carried out to confirm the potential for improvement using current, leading edge technology.

The Demonstration and Proposal

A Fulgor Focus loudspeaker was borrowed and set up with the objective of confirming to how much of the congregation it could provide intelligible speech and the speaker was left in place for a weekend so that it could be tested during a number of services. Prior to one of the services, I was able to take an intelligibility measurement reading using an NTI Acoustilyzer of around 0.6 whilst covering more than half of the congregation which was very encouraging.

The Fulgor Focus loudspeaker was proposed because it is possibly the only true powered steerable array that can receive power and audio signal through a single two core cable whilst control signals are communicated directly with the loudspeaker’s digital circuit reducing the number of installed cables from three to one which is very helpful in a listed building installation such as the church of St. Mary & St. Joseph

The Fulgor Focus loudspeaker is manufactured in Italy where it was designed specifically for the Catholic Church who have, of course, a large number of historic monuments where cabling must be kept to a minimum.

Happily, the demonstration test proved to be entirely successful with parishioners and clergy commenting very positively and specifically, how it was possible to hear the difference from being within the defined pattern of the loudspeaker or outside of it; this proved the need for two loudspeakers to take account of the considerable width of the seating area into the Transepts.

In addition to our measuring speech intelligibility in the region of 0.6; a reasonable achievement in such a difficult space; it is pleasing to report that not only is speech now delivered intelligibly but with a notably natural quality that is not always possible where processing associated with beam steering is necessary.

Following receipt of an order installation soon commenced; initially, retaining the existing ‘front end of the system’ although we have now moved on to replacing microphone mixing, installed cabling and radio microphones and crucially it has been possible to remove numerous old loudspeakers resulting in an altogether cleaner appearance for the interior of the church.